Early models of communication, like Harrold Lasswell’s 1948 model (Who says what in which channel to whom with what effect) were linear in nature. This is a transmitter-centric model. These early models implied that it was the burden of the receiver to decode the message and understand it. Essentially, if I spoke in Mandarin to a group of English speaking people, it was up to them to seek interpretation – even though it was I who wanted to get my message out.

Effective communication is a process that uses symbols to reach a shared understanding. The message that is to be conveyed must be converted from a thought into a code – a series of symbols used to represent those ideas. This code is language. We understand that people do not speak the same language, even from the same country. Even the “same” language isn’t always the same. Cultural, professional, and educational difference change the language and this can be another source of noise.

There are four basic types of noise: psychological, physiological, external, and semantic. The first three could fill volumes but simply stated, they deal with things like emotions or mental illness, hearing impairments, and background noise. The last one, semantic noise, is the one that I want to discuss.

Semantic is defined as “of or relating to meaning in language” (Merriam-Webster). Thus, semantic noise obstructs effective communication through the different meanings of words. It is more than just misunderstood words; using words that another person doesn’t understand is also semantic noise.

An effective communicator is a receiver-centric communicator. This is someone who pays attention to his or her audience and adjusts their communication style to make the message as understandable as possible. This means cutting through all of the noise you can. Talk louder to get over that background banging in the ducts. Speak slowly and clearly if your audience cannot hear well. Use a language your audience can understand.

Verbal communication is not limited to the spoken word; it is any use of words to communicate. As such, writing is considered a verbal form of communication. It is just another channel we choose to convey our message through (or the clients’ messages as in the case of a mediated agreement). The noises discussed earlier still apply. Obviously, poor penmanship is an obstruction to effective communication. In speech, we ask that you be articulate and enunciate clearly. Bad handwriting is the written equivalent of a mush mouth. Write so someone other than you can read it.

Furthermore, semantic noise is present in writing. Using words that the client does not understand is the equivalent of speaking a foreign language. Requiring the person to loo 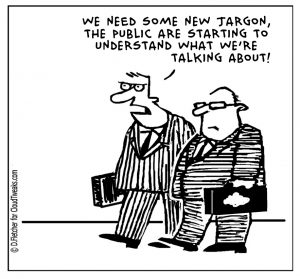 k up words is not being receiver-centric. Evaluate your audience and adjust your language to meet theirs.

This is not talking down to someone, this is talking to them in their language. “If you talk to a man in a language he understands, that goes to his head. If you talk to him in his language, that goes to his heart” (Nelson Mandela). While this is not French, Spanish, or Xhosa – the law and medicine (and most professions) have languages of their own. While a layperson may be able to cipher out what is said, it is better to be receiver-centric and speak or write in their tongue.